“The many changes taking place with venues throughout the country presented this unique opportunity,” said Chris Blair, World Wide Technology Raceway’s Executive Vice President and General Manager. “One of the biggest expenses faced by the sportsman racer is the cost of getting to and from the track. This schedule adjustment will provide racers with the opportunity to make one haul to the St. Louis area, compete in two Lucas Oil Series events and remain on-site for the following weekend’s AAA Insurance NHRA Midwest Nationals.”

The change in schedule also has the popular Import Face-Off Series moving to Sunday, October 11, and adjusts the dates for some of the remaining Midnight Madness street-legal drag racing events. The schedule also reflects a few race dates listed as TBA, and other events that have contracts which have not yet been finalized.

“As we move later into the season, some of the traveling series, participant-only races and non-racing related events are still in the process of shoring up sponsorships,” Blair explained. “As a result, we expect to host some events that were not on our original schedule.” 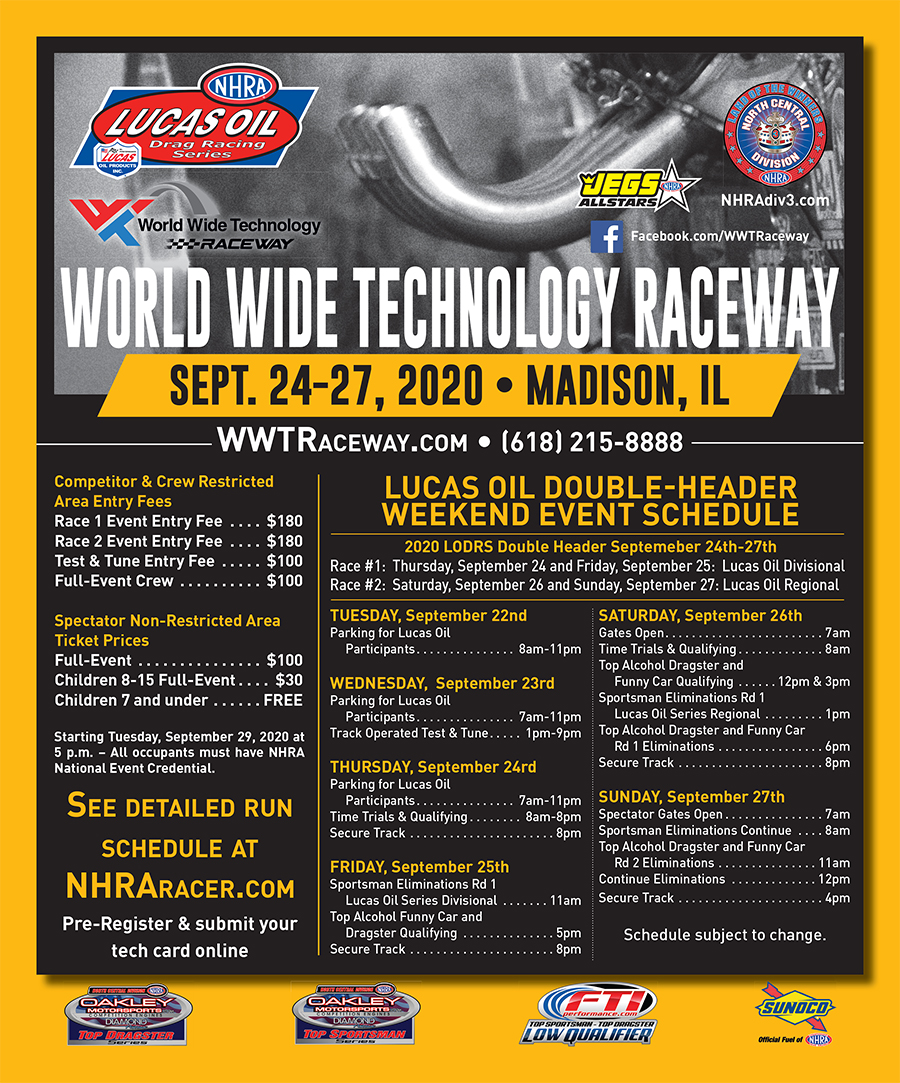 World Wide Technology Raceway is the home of INDYCAR, NASCAR and NHRA racing in the St. Louis region. Located just five minutes from downtown St. Louis and covering more than 600 acres, WWTR is the largest outdoor entertainment facility in the area. WWTR’s facilities include a 1/4-mile drag strip, 1.25-mile superspeedway, recently-expanded 2.0-mile road course, a state-of-the-art karting facility, a 14-acre, multi-purpose dirt off-road venue and the Gateway Drive-In Theater at World Wide Technology Raceway (a drive-in entertainment venue able to accommodate 3,000 cars). WWTR acquired Gateway National Golf Links, adjacent to the speedway property, in 2019. WWTR was the recipient of the 2017 Outstanding Facility of the Year Award from the Race Track Business Conference and the 2017 Spirit of St. Louis Award from the St. Louis Attractions Association. In 2018, owner and CEO Curtis Francois received the Innovator Award from the St. Louis Convention & Visitors Commission in recognition of his work for restoring World Wide Technology Raceway (known then as Gateway Motorsports Park) to prominence.