December 4, 2019, St. Louis Region – Officials at World Wide Technology Raceway in Madison, Illinois, today announced the addition of the new Midwest SuperStar Bracket Series to its 2020 track schedule. The series, which will pay $10,000 to the winner of each day’s bracket event, will consist of six races over two weekends. The first event will be held April 17-19, 2020, in conjunction with the NHRA Division 3 JEGS Super Quick Series. A second event is scheduled for June 12-14, 2020.

“Our sales team, drag strip staff and our core racing community are working hard to secure additional sponsorships and bonus awards for the series so that participants are competing for a true championship,” said World Wide Technology Raceway Executive Vice President and General Manager Chris Blair. “Our team will be aggressively working the floor at the PRI Show in Indianapolis in hopes of securing both cash and product awards for the top 10 points earners in the six-race series. We hope to have some exciting announcements prior to the start of the 2020 season.”

Each of the two event weekends will feature early parking on Thursday evening and complete days of racing on Friday, Saturday and Sunday. The SuperStar series will consist of one bracket class with door cars and bikes racing each other and dragsters racing dragsters as late as possible through the program. Multiple entries will be permitted and a color-coded punch card system will be used. Buy-backs will be offered in the first or second round if there are less than 170 entries. If there are 170-299 entries, only first-round buy-backs will be offered. If there are more than 300 entries, no buy-backs will be offered. All races will be contested as 1/8-mile. Super Pro ET limits for 1/8-mile racing: 3.66 seconds to 7.75 seconds.

In addition to the Midwest SuperStar Bracket Series, WWTR also will host two $5,000 events in the autumn (dates TBA), a bracket class in conjunction with NMRA and NMCA, a pre-1979 footbrake special in conjunction with the new Mother Road Rendezvous nostalgia event in May and the local E.T. Racing Series track championship program.

WWTR, formerly known as Gateway Motorsports Park, is just five minutes from downtown St. Louis. WWTR is currently in discussions with other event promoters regarding local and regional classes at soon-to-be-announced special events. 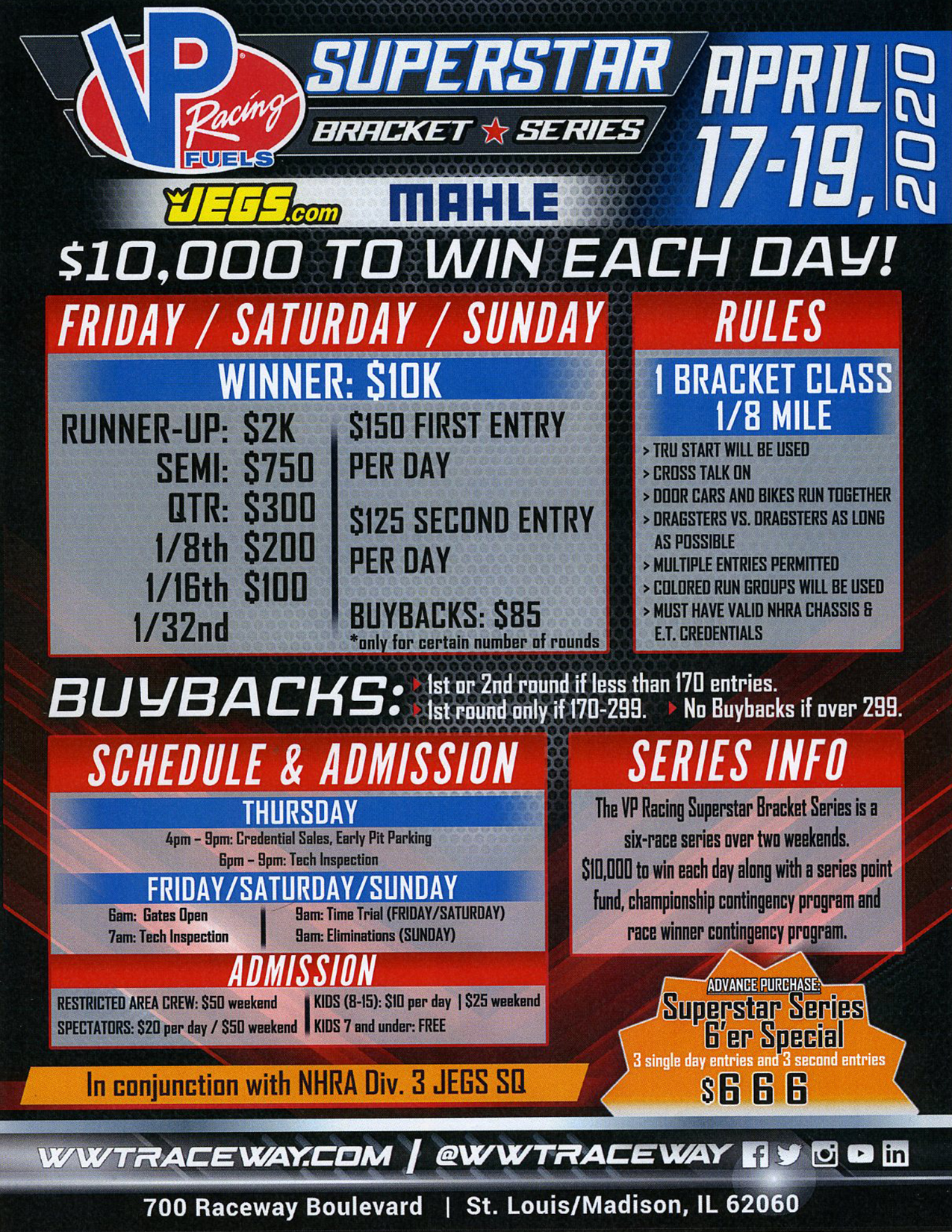