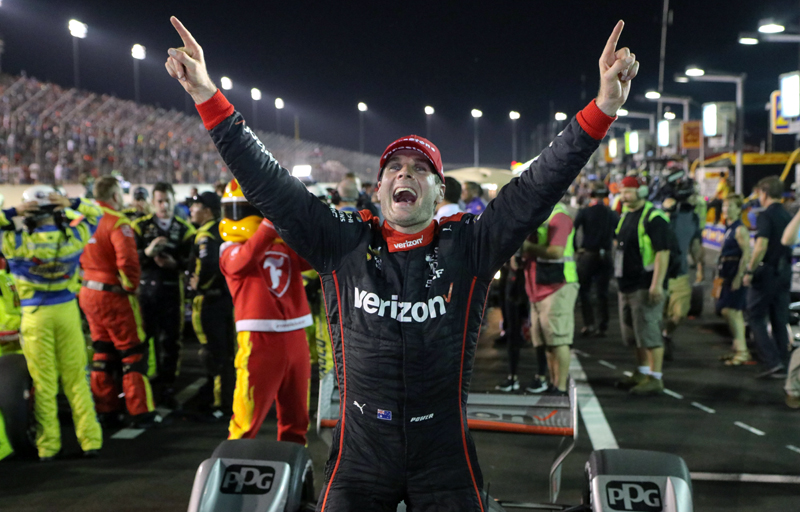 Will Power was on a race strategy Saturday night he almost never uses.

Instead of using the familiar fuel-saving mode he’s been used to in past races, Power was full speed ahead and it proved to be a success.

Power, who started on the outside of row 2, won his third race of the season when he captured the Verizon IndyCar Series Bommarito Automotive Group 500 presented by Axalta & Valvoline at Gateway Motorsports Park.

“All I knew was (team owner) Roger (Penske) said go wide open,” recalled Power, whose other two victories this season came in the Grad Prix of Indy and the Indianapolis 500. “The other guys dropped back and tried to save fuel. I figured there’d be a number of guys try to do it. I saw the number you had to get for us. You had to go so slow to get that number.

“I thought we could probably make that time up if we just ran wide open. That was the case. It was the first time in my career I’d gone that way instead of saving fuel.

“I’m very good at saving fuel. There were so many times I wish I could have run wide open…When you’ve got Roger on the radio, he’s always pushing you to go wide open. We had a fast car and that’s what we did.”

Power, who led for 93 of the 248 laps, used that fast car to grab the top spot on lap 150 heading into Turn 1 when he got past Dixon. From that point on, Power stayed in command to best 20 other cars.

Power did have to make one last fuel stop on lap 231 and needed only 4.2 seconds to make sure he was good to go to the end.

That’s what happened and Power earned the 35th win of his career, tying him for seventh on the all-time IndyCar wins list with Bobby Unser Jr. It was Team Penske’s 203rd victory.

“I was so happy to win one for Roger,” Power said. “When he told me I could go wide open and not save fuel, that was a great call. I’ve never passed so many cars in a short period of time.”

Everybody is coming to the pits for tires and fuel on lap 177, including race leader Will Power. Power had held a 3.4705-second lead over Scott Dixon.

Dixon had been in front when Power, this year’s Indianapolis 500 winner, slipped by Dixon in Turn 1.

—
After a second round of pit stops in the Verizon IndyCar Series Bommarito Automotive Group 500 presented by Axalta & Valvoline, polesitter Scott Dixon maintains the top spot over Alexander Rossi.

Zach Veach will be issued a post-race fine for equipment out of the box after his pitstop on lap 122.
—

And the first yellow flag has flown when Sebastien Bourdais slapped the Turn 2 wall. He was checked out at the infield care center and released.

“I had a great time racing him,” Norman said of Herta. “It was pretty fun. With 15 laps to go, that’s when I figured out a line. I really didn’t have the option to go up there. I had to try something.”

At the drop of the green flag, polesitter Herta raced out to the lead and was in front for the 69 of the 75 laps. But when the second-starting Norman got his strategy figured out, he made the bold move.

It started in Turns 1 and 2 when he used the high line and dropped down exiting Turn 2. That gave him momentum for his move to take the lead from Herta as they went through Turn 3.

He completed the pass on the front straight and took the checkered flag as Herta tried everything to get around his Andretti Autosport teammate.

“I don’t even remember the pass,” Herta said. “I think with even a good car, he was strong where he needed to be. It was all about (Turns) 1-2. I’m happy with the race, a little bit disappointed with the result.

Colton Herta won the pole for the Mazda St. Louis Indy Lights Oval Challenge with an average speed of 159.075 miles per hour.

Herta, of Valencia, California and the son of former IndyCar star Bryan Herta, had a two-lap time of 56.5771 seconds.

SATURATION SATURDAY
Fifty-eight local police departments on both sides of the Mississippi River (Missouri and Illinois) are participating in Saturation Saturday.
It is a massive effort to get drunk drivers off the road.
Their slogan is “Drive sober or get pulled over.”
NEVER drink and drive. Use a designated driver. Use Uber or Lyft. Call a cab.
SATURDAY, AUG. 25 — 9:49 A.M. CDT

For all fans attending today’s festivities in preparation for tonight’s Verizon IndyCar Series Bommarito Automotive Group 500 presented by Axalta & Valvoline, be sure to dress appropriately for the weather.

The St. Louis area is under a Heat Advisory starting at noon today and running through 7 p.m. on Tuesday. Today’s high temperature will be in the mid-90s with a heat index around 105 and dew points in the lower 70s.

The jet dryers are on the track drying up some damp spots, while the IndyCar Safety team is patrolling pit road as well as the track looking for any debris.

All activities today will be open-wheel related.

The following is the schedule for today and, as always, is subject to change.

Klaus, who will turn 17 on Sept. 1 and has the face of a much younger teenager, easily beat Cole Rouse by 5.374 seconds. Derek Thorn was third, followed by Ruben Garcia Jr. and Chase Cabre.

As always, thanks for reading. Now sit back, buckle in and relax and enjoy the second annual Bommarito 500.

Kraus, who will turn 17 on Sept. 1, beat Cole Rouse by 5.374 seconds. Derek Thorn was third, followed by  Ruben Garcia Jr. and Chase Cabre rounded out the top five.

“Our guy just fired out really good,” said Kraus. “You slow down in Turns 1 and 2 and that’s where we made up so much.”

Kraus, who hails from Stratford, Wisconsin and races in the K&N West Series, started next to polesitter and rookie Spencer Davis.

Davis took off and left the other 25 competitors behind. But, by lap 26, Davis fell to second behind Cabre and steadily dropped in the field. He wound up 24th because of an engine issue.

Meanwhile, after a red flag competition stop on lap 43, Kraus had fallen back to fourth. He got to third when the next red flag came out on lap 80.

By lap 92 of the 120-lap event, Kraus got to the top spot by getting around Rouse and took off from there.

As for Rouse, he failed to make the optional practice session on Thursday and showed up five hours late.

“Not coming to practice (Thursday) really hurt us,” he offered. “I got five laps on the track today (rain shortened the series practice session Friday afternoon) and that’s all I got. That definitely didn’t help.

“I felt we were a little bit better than Kraus. The last stop, I don’t know what they did. They were pulling away like crazy.”

Kraus, who won for the fourth time in his career, said winning at Gaterway “is a real confidence and momentum builder for the team going into the rest of the season.”

Alexander Rossi claimed the top spot in the final Verizon IndyCar practice Friday night when he went 183.060 miles per hour in 24.5821 seconds.

The cars are now back on the track and series points leader Scott Dixon has recorded the fastest time and speed to this point.

The Verizon IndyCar series machines are now on the Gateway Motorsports Park 1.25-mile oval for their one hour practice.

There was one early yellow after Marco Andretti’s car quit running and had to be towed to the garage area.
Another yellow came out as officials wanted to do a track inspection.

Colton Herta, son of former IndyCar star Bryan Herta, was the fastest in practice as he ran around the 1.25-mile Gateway Motorsports Park oval in 27.8755 seconds at 161.432 miles per hour.

Rain has again brought out the yellow flag, and with the cars sitting on pit lane, the session ran out of time.

The next time the Verzion IndyCars are on the track will be for qualifying at 6 p.m.

The yellow is out in the NASCAR K&N Pro Series practice session after Takuma Koga, of Nagoya, Japan, spun out in Turns 3 and 4.

1:52 p.m. CDT FRIDAY
If you are coming to Gateway Motorsports Park this weekend for the Bommarito Automotive Group 500 presented by Axalta & Valvoline and want to get quickly onto the track’s property, the best way is not through the front gate.

There are three lanes that will now take traffic to new parking lots. If you want to enter through the front gate onto the property, you will be crossing lanes of traffic which will often cause backups.

After a rainy morning, the precipitation has stopped at Gateway Motorsports Park and the track drying process is underway.

If everything goes as planned, race cars will hit the 1.25-mile oval starting at 2:15 p.m. when the NASCAR K&N Series cars practice for 30 minutes.

Following NASCAR will be the Verizon IndyCar series practice from 3 p.m. to 4 p.m. After that, the Mazda Road to Indy series hits the track at 4:15 p.m. for one hour.

The K&N Series then holds its qualifying session at 6:45 p.m. followed by IndyCar’s final practice from 8 p.m. to 9 p.m.