ST. LOUIS, MO. (FEBRUARY 23, 2021) – It’s been more than 30 years since the St. Louis region has had a national champion in a major motorsports series – most recently Rusty Wallace in 1989. Now, a new local initiative will provide aspiring IndyCar drivers with a unique opportunity to turn their dreams into reality.

Ignite Autosport with Cape Motorsports is a new initiative led by KhS Global, the global leader in OEM automotive solutions, managed by Margay Racing, the leading U.S. manufacturer of racing karts and accessories, and with support from World Wide Technology Raceway (WWTR) and other St. Louis-area contributors. The program is designed to develop the best local talent, based on their driving ability, into motorsports champions, helping to remove the financial burden most drivers face when progressing from karting to higher levels of motorsports.

Two local drivers, Spike Kohlbecker from Kirkwood, Mo. and Evan Stamer from Glen Carbon, Ill., have been chosen for the inaugural Ignite Autosport team, representing the best rising racing talent in the region and beyond. Both were selected for their driving talent and ability to win races, and will participate in the USF2000 Series, a part of the Road to Indy, a driver development program that creates a path to reach the NTT INDYCAR SERIES and Indianapolis 500. Scott Blind, a St. Louis-based entrepreneur and motorsports fan, is the Ignite Autosport team owner.

“Evan and Spike are motorsports champions in the making, two exceptional local drivers who are primed to reach the upper levels of the sport,” said Keith Freber, Owner of Margay Racing and Ignite Autosport Team Manager. “Through the Ignite Autosport program and with the support of the St. Louis community, we want to create the next generation of motorsports champions. Our program is unique because our drivers do not have to bring their own funding to compete, enabling them to concentrate fully on honing their driving skills and winning races.”

Initial funding for the program has been provided by Scott Blind. With strong team leadership from Keith Freber and a terrific partnership with WWTR, as well as future support of other local contributors, this initiative will help grow the region’s talent and broaden opportunities for all young drivers.

“Ignite Autosport represents the best of our local community – a true ‘St. Louis Made’ collaboration – bringing together our area’s great motorsports fans, racing talent, world-class racing facility, and the Ignite Karting program, to become a launching pad for IndyCar’s next champions,” said Curtis Francois, owner of WWTR. “Together with the St. Louis community, we are committed to growing this program and building a racing legacy for the region.”

Ignite Autosport is an extension of Margay Racing’s Ignite Karting program at WWTR’s Gateway Kartplex, providing racers of all ages the opportunity to have fun, compete, and develop their driving skills in karting. Both Kohlbecker and Stamer began their racing careers in Ignite Karting and credit the program with developing the skill and experience needed to rise to the next level of motorsports. The Ignite Karting program partners with leading sanctioning bodies and well-known motorsports venues across the country to offer affordable ‘spec’ kart racing opportunities, offering a fast and fair environment that puts an emphasis on driver development. 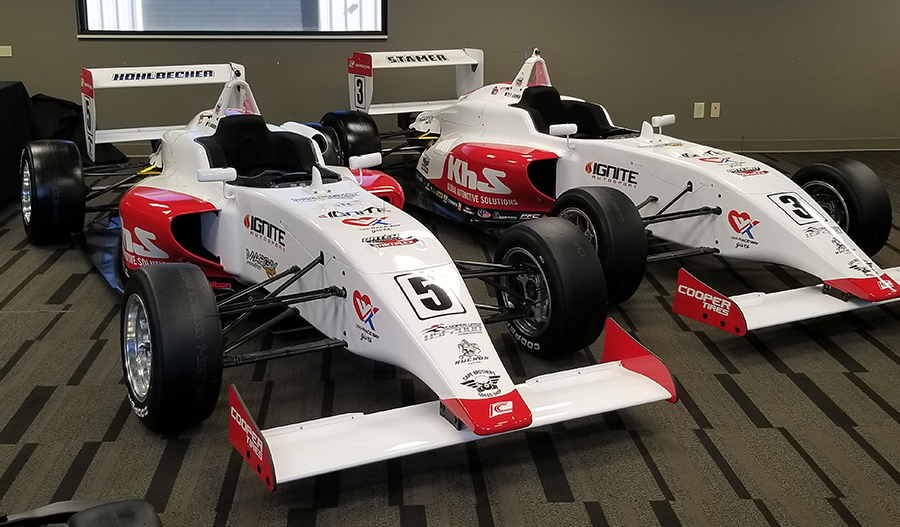 Based in St Louis MO, KhS Global is a world leader in automotive hail damage repair, “paintless dent removal” (PDR). In addition, KhS provides factory based technical solutions for auto manufacturers as well as a vast array of “in-transit” services to the new car logistics network. KhS is headquartered in St. Louis, MO with offices in Calgary, AB and Mexico City.

Based in Saint Louis, MO, Margay Racing is the most successful sprint kart manufacturer in the United States, supporting drivers in all divisions of karting and producing winning karts for countless local, regional, and national champions. Now in its 57th year, Margay is owned by third-generation family member, Keith Freber. More information on Margay can be found at www.margay.com.

The goal of Cape Motorsports is to provide unmatched driver development both on and off the track. It can be challenging for a young driver to enter a professional racing series and win, regardless of talent, and through coaching and mentoring, Cape Motorsports provides young drivers with the knowledge base and work ethic necessary to achieve success.

World Wide Technology Raceway is the home of INDYCAR, NASCAR and NHRA racing in the St. Louis region. Located just five minutes from downtown St. Louis and covering more than 600 acres, WWTR is the largest outdoor entertainment facility in the area. WWTR’s facilities include a 1/4-mile drag strip, 1.25-mile superspeedway, recently-expanded 2.0-mile road course, a state-of-the-art karting facility, a 14-acre, multi-purpose dirt off-road venue and the Gateway Drive-In Theater at World Wide Technology Raceway (a drive-in entertainment venue able to accommodate 3,000 cars). WWTR acquired Gateway National Golf Links, adjacent to the speedway property, in 2019. WWTR was the recipient of the 2017 Outstanding Facility of the Year Award from the Race Track Business Conference and the 2017 Spirit of St. Louis Award from the St. Louis Attractions Association. In 2018, owner and CEO Curtis Francois received the Innovator Award from the St. Louis Convention & Visitors Commission in recognition of his work for restoring World Wide Technology Raceway (known then as Gateway Motorsports Park) to prominence. The 2021 season marks the 10th year of Francois’ ownership of the facility.